The Dominican Republic is known for mass tourism: Countless resorts, “todo incluido” dominate the beautiful coasts and beaches. It makes a lot of money, but hardly by the population. Most tourism projects have been set up by large foreign investors who also collect the profits. The salaries earned by local workers are low; they do not exceed €100 to €125 per month. While prices for food and other basic needs are high, comparable to Dutch prices. So much poverty, sometimes right next to the resorts. Here a good part of the workers lives in simple huts. Cottages are often still with a mud floor without running water and usually with only a few hours of electricity a day. Most workers don’t have a contract. If there are fewer tourists, part of the resort will be closed and staff can stay home, with no income. It is all very unpleasant for the people concerned, but we Europeans are taking advantage of it. We can take advantage of the countless cheap offers: 10 days Dominican Republic for less than € 700, all including, including the flight.

The local population suffers in more ways from our unbridled tourist needs. The resorts claim large stretches of beach for their visitors. Forbidden to the locals. That was always against the law, because the Dominican constitution stipulated that all beaches should be freely accessible to Dominicans. However, the constitution is being adapted in favour of mass tourism. The new version of the constitution recognises the right to private ownership of beaches. This opens the way to accelerated privatisation of more and more beaches where only foreign guests of resorts will soon be allowed.

But fortunately, there are other developments in the country as well. For example, the number of small-scale (eco)tourism projects is growing rapidly. Almost always set up by the local population who also collect the income. Below is a special example of such a project.

In November 2009 we spent a few days in the eco-tourist project ‘Sonido del Yaque’, located in the village of ‘Los Calabazos’, a small hamlet in the mountains of the Cordillera Central in the Dominican Republic. The village is beautifully located on the Yaque del Norte River, about 10 kilometres from the town of Jarabacoa. You can hike here and a few kilometres away there is a very pleasant ‘balneario’ (swimming spot in the river). Nearby is also the starting point for a rafting route. There’s no road leading there. You’ll get through from Jarabacoa the road to Manabao/La Ciénaga for 10.5 km. to follow. From there, next to a small colmado (grocery store), a ‘staircase’ goes into the valley to Los Calabazos, about 100 meters below. Across the road is the ecological coffee plantation ‘Café Alta Gracia’ by Julia Álvarez (well-known Domincan-American writer). This can be visited, as can other nearby ecological coffee plantations. At the end of the road, past Manabao, is La Ciénaga, a starting point for treks to the Pico Duarte, the highest mountain in the Caribbean.

Our stay became a special experience. Los Calabazos is a collection of about 35 cottages (300 inhabitants) where life still goes its traditional way. We stayed there in one of the cabañas (bungalows) which were built there, under the guidance of the local women, by the local community. The rooms are simple but functional with a bathroom which has a sink, a (cold water) shower and toilet. Up close we experienced everyday life. We went out with one of the families to get coffee. We had dinner at another family in the house (There is also a simple restaurant where you can eat). The care we received was particularly cordial. The only sound you hear in Los Calabazos is the sound of the river and sometimes a (softly playing) radio.

Sonido del Yaque has become an ecotourist project where groups mainly participate in courses on sustainability. These then take care of their own teachers while residents of Los Calabazos participate as experience experts. In addition, individual tourists are also welcome.

Los Calabazos is one of the first communities in the Dominican Republic to meet its own needs in a sustainable way. There is a small hydroelectric power station and an aqueduct which gives every house 24 hours a day with (almost free) electricity and running water. This is unique in the Dominican Republic. The country is plagued by a desperate energy system which means that there is no electricity outside the areas with tourist resorts for large parts of the day. And in a lot of villages there is no running water. Often the residents depend on a single tap where a few times a week, for a few hours, water comes out with a questionable quality. Furthermore, Los Calabazos now has two large greenhouses where vegetables are grown in a sustainable way. Work is underway on the construction of basins for an organic fish farm. A biogas generation system is also on its way. To this end, the plumbing in the cottages will be connected to a few collecting tanks in the near future. In this way, they hope to have gas of their own. Now they often cook on wood, partly because it is quite a job to send gas cylinders to and from the village. All amenities are small-scale but well thought out.

The way in which all this and much more came about in Los Calabazos is very special. This was evident from several conversations we had with Esperanza, the woman who should be seen as the engine of all sustainable innovations in Los Calabazos. Here’s a brief account of these conversations:

Esperanza Marte Victoriana is in her early 50s. She’s an energetic and happy woman. But she can barely read or write. She couldn’t go to school. She became a mother at a young age and needed her time to raise children, seven in total, six girls and one boy. She’s lived in Los Calabazos all her life. People there have always been penniless.

Thirteen years ago, the children were now large, Esperanza felt it was time to move the beacons in Los Calabazos. She most definitely does not lack ideas and perseverance. Despite her lack of education, she had been chairman of the women’s committee in the village for some time. This committee thought that there might be some tourism. Maybe a village restaurant could make some money? However, the men didn’t see anything in it. None of them were feasible. The daily struggle for survival actually costs too much energy.

But Esperanza did see perspective and with her most other women. They decided to carry on and make a fresh start. They united against the men and in 1997 the ‘Club de Madres de la nueva Esperanza’ was officially founded (‘nueva esperanza’ means ‘new hope’). Almost all the mothers of the village, 24 in total, participated. And despite the resistance of the men, more and more plans were made. Esperanza went to nearby Jarabacoa to mobilize people for those plans. She knew what she wanted and she also knew what she needed: money! She discovered who to approach and she managed to interest people. The little restaurant came there. And in 2000 a Cooperative was founded that started building the cabañas for tourists. The Club then managed to raise some money from various funds to build the hydroelectric power station and the aqueduct, which transports drinking water from high up the mountains to the village.

By now, the men of the village had come around. And in 2001, an official covenant was concluded in which the men agreed to cooperate. They were willing to work for the projects. In addition, the limited income that can be earned from this is still very nice.

Now the village is a few years further. Two suspension bridges were built over the Yaque, one on both sides of the village. About twenty of the houses could be renovated with a grant. A larger restaurant is currently being built. Reforestation projects are carried out on the slopes of the surrounding mountains.

The starting point for all activities is that they must be ecologically sound. No damage should be done to the environment. International funds have now gained so much confidence in the plans of the Club de Madres that money can be found relatively easily.

Health prevention programmes and hygiene programmes were carried out in the village. In addition, courses and training are given on topics such as the environment, ecology and improving services for tourists. And, given the recent history of the village an important theme: cooperation within the family. Every year, the Club de Madres creates a policy plan stating which goals should be achieved that year. The Administrativo Committee, which manages the money, has an important place in all activities. That Committee consists of 5 women and 2 men. “The men must also be represented in the Committee,” says Esperanza, “because we have to keep the harmony.” Right now, the Treasurer is a man.

The Committee has created a distribution key for the proceeds of the funds coming through tourism:

30% is reserved for improvement and maintenance

40% is for the women who cook and clean

10% is reserved for improving communication with the outside world (telephone connection, website, etc.).

Gradually more tourists come to Los Calabazos. And while not much yet, it still brings in money.

“We are still very poor”, that’s how Esperanza concludes our conversation. But very slowly things are getting better. And most importantly, she says, “We have a perspective to live for.” 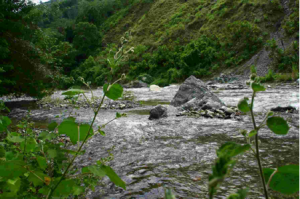 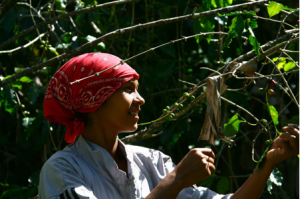 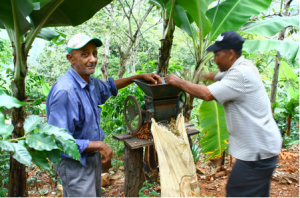 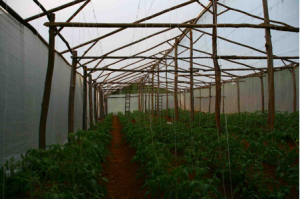 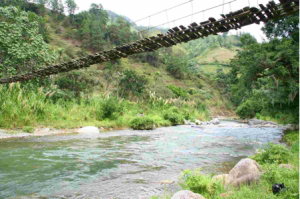 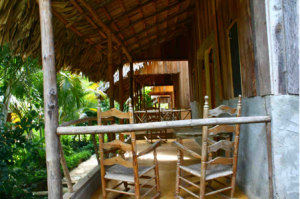 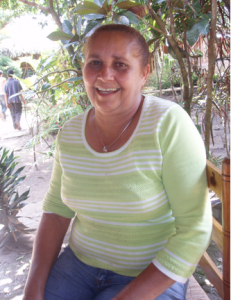