Today, the Tribal Tourism series brings us to a mountainous region in the centre of the Indonesian island of Sulawesi. In this region, you will find the Torajans of whom most of them live in Tana Toraja, which translates to land of Toraja. It wasn’t until the last century that the Torajans opened up from isolation and the world learned about their interesting traditions. Some of you might have heard about the Toraja in relation to their funeral ceremonies, the so-called Rambu Solo’. Death is the ultimate goal of life and family and friends will come together and celebrate at the funeral.

About the Torajan People

The Torajan culture has been under a constant threat for several centuries. At first, this threat came from the Bugis from the southwest who drove the Torajan people into the inland of Sulawesi where the Torajans built their villages on hilltops for better security. From 1905 the Dutch formed another threat because they had started a bloody campaign to control Central Sulawesi. Missionaries came along and when WWII started many Torajan ceremonies had disappeared. Funeral ceremonies, however, have remained and still form a vital part of the Torajan’s life. Therefore, the Torajan people often believe in a mix of Christianity and their old belief of which Puang Matua was the special God.

In the early 2000s, the Torajan population counted 750.000 people.  By origin, the Torajan people are farmers and some of the industries that are also present within their culture are wood carving, pottery and weaving. During ceremonies, the Torajan people sometimes wear traditional clothes, but in daily life they wear clothing based on Western models.

Traditionally, the Torajan people lived in a tongkonan, which can be seen in the image on the right. A tongkonan belongs to a family clan that is related by blood. An elder of the clan is supposed to teach his family about the way the ancestors lived.

Buffaloes are a status symbol in Toraja and form an integral part of several ceremonies, like Rambu solo’ as explained above, as a business transaction or exchange tool in weddings. Traditionally, the buffalo shows wealth and power.  The worth of a buffalo is measured by its weight and health. Therefore, buffaloes are often not used to work on the land, but are left to graze and rest. An albino buffalo is even worth more than US$8000.

When somebody passes away, Western people would usually say that that person is dead. To the Torajan people, this person is to makula, a sick person. The soul is still around. Traditionally, the sick person should never be left alone. There always needs to be someone to take care of him or her. The family often takes turns in staying with the sick person. How this is divided is up to them, but some people change company each month. Often, when another family member arrives, they offer the sick person a cigarette. The meals are also shared with the to makula.

To preserve the body, formalin treatments are done shortly after death which eventually will lead to mummification. It is important that the body is preserved, because the cycle from “to makula” to death can be a long one. After some time, the to makula can be replaced from the house to a special tongkonan.

Meanwhile, the tau tau, wood-carved effigies, are created, traditionally dressed  to resemble the person. These tau tau are a symbol for the continuation of life after death. The effigy is placed above the cave where the person is buried, overlooking the land of the Toraja. Not everybody can afford a tau tau, which is why not every grave is accompanied by one.

Next, there is Rambu Solo’, the ceremony for the departed that is going to join his ancestors. Water buffaloes play an important role in this ceremony. It is believed that every buffalo that is sacrificed, makes the afterlife, puya, easier. More respected Torajan people require more buffaloes to be sacrificed. Sometimes this number can go up to hundreds of buffaloes. Besides buffaloes, pigs are also slaughtered at these ceremonies. As the ceremony is a celebration, many people come to attend and the meat of the sacrificed buffaloes is divided amongst them. When there is a lot of meat, restaurants can also  receive a share and that is why you can often find buffalo steak on some of their menus. After the ceremony, the attendees gather for a joint meal. At last, a traditional cave burial takes place. While there are several burial methods, the graves are often created in caves and cliffs. In general, the more noble the person, the higher the grave is situated. It can take up to years before the different stages of the rituals are completed, because the entire family needs to get together and money needs to be saved for the rituals. 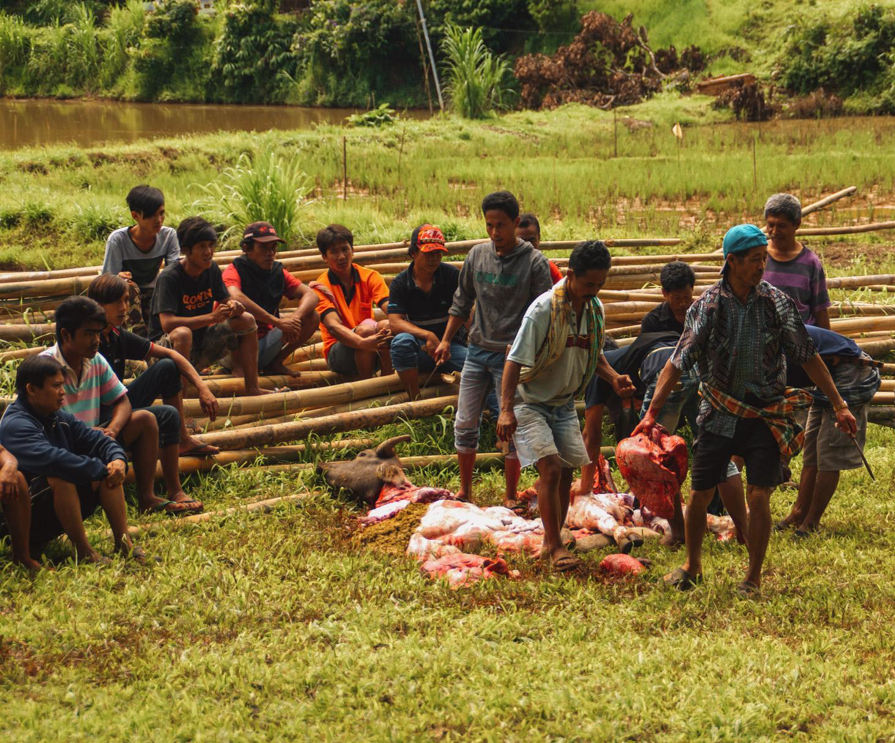 Tourists are able to attend a funeral ceremony in Tana Toraja. It is believed that by taking photos, thetourists will bring them back to their faraway homelands and the family will become known to more people, which is said to bring good luck. It also shows the importance of the family whose ceremony they are visiting. Often these funerals are held between June and August, after the rice harvest, as this is the time when money is available for the ceremony. With some luck, tourists can get invited to a Torajan wedding, which is often a combination of a Christian wedding ceremony in church and a traditional wedding ceremony surrounded by Tongkonan. To both events, weddings and funerals, tourists are expected to bring a gift, just like other guests. For this purpose they often bring cigarettes that will be placed with the deceased person in his or her resting place. Besides cigarettes, other valuables that the dead person favoured during life will be buried with him or her. Besides attending one of the ceremonies, tourists can also visit some of the traditional Torajan sites related to the death rituals. Some examples hereof are Kambira, here you can find trees in which babies were buried, Ke’te Ke’su, a traditional settlement, and Londa, where you can find burial caves.

Toraja Utara is also home to a community-based tourism village called Sesean Suloara’. Here you can learn more about the Torajan culture and witness some traditional art performances. An interesting  project that the community has started is the initiative of ‘Bring Back Your Waste’. When you want to go hiking to the peak of Mount Sesan, you are asked at the gate to pay an entrance fee. In return, you will get a waste bag which you can fill during your hike and return to the entrance gate. By doing so, the trail will hopefully stay free of litter.

The description of life beyond death is a short summary of the happenings. These rituals are often more complex and several aspects could differ. If you would like to know more, National Geographic has written an interesting article about their experiences with a Torajan ceremony.